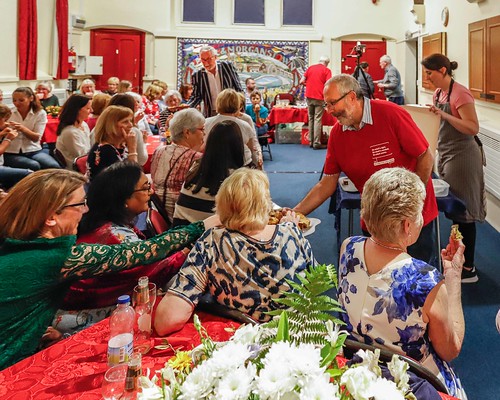 Festival 2019 started on Saturday May 4th with the Parade and Fete. Kate Lewis, from ITV Wales joined the parade with the Festival Queen, Megan Vigliotta and her two attendants Maycee Tustin and Crystal Wales. At the OCR, Kate welcomed everyone and opened the Fete. The weather was glorious, the burgers and hot dogs excellent and we were all entertained by a puppet show for the children and an exhibition of Salsa dancing for the adults. In the evening there was a charity concert with Cantorion Creigiau Singers at Christ Church.

Sunday started cool and sunny for the Festival Walk. This was led by Allan Cook who took us inside the quarry. We had not been inside for about ten years so some people had never seen how large the quarry was. On leaving the quarry we went past the lime kilns and the old Ty Nant quarry workings and stopped to look at the Ty Nant and the Bethal Chapel. In the evening there was a Civic Service at Christ Church which was attended by Mark Drakeford AM and Kevin Brennan our MP. This was followed by a reception organised by R&MCC.

On Monday we had the fun run and the crowning of the Festival Queen. All the children performing were brilliant maypole dancers, the weather stayed fine and the tea and cakes from the ladies of Treforgan WI were superb.

Tuesday was Welsh night and on Wednesday there was a production of “Night Must Fall” performed by the Fluellen theatre company. MVH was full and everyone said how much they enjoyed the Emlyn William’s thriller.

Thursday saw the Tenovus quiz. 11 teams of 8 took part and there was much merriment and the usual arguments with the question master who says he was always correct, even when he was wrong.

Friday saw the first of our lunchtime concerts with Lucy Elstan and Stian Okland from the Wales International Academy of Voice, accompanied by Llyr Simon. It was sold out and everyone said how good the performance had been. In the evening we were treated to the Twinning Jazz night with another excellent performance by Cube.

On Saturday we had the Concert in the Parc. Our trusty band of helpers were at the OCR at 8.15 to collect marquees, gazebos, the bar stock, bbqs etc. We were set up for the first act at 12 noon. An amazing performance by the children from the combined primary schools. Performances continued until 6pm in glorious weather when the last band finished. In true R&M fashion the bbq sold out, as did the beer. A great time was had by all.

Sunday dawned  with a quieter event, the open gardens. This also included a plant sale at the OCR. In the afternoon we had the regular dog/tractor show in Lychgate Gardens.

Monday had a new event, organised by our charity. The sing-along-a-sound of music took place in the Methodist Church and there were some croaky voices on Tuesday morning.

Tuesday we had a showing of a Charlie Chaplin film “The Kid” along with a number of other shorts.

Wednesday there was a coffee morning organised by the charity to raise funds, and in the evening there was a Beetle Drive for the youngsters and a cookery event in the OCR. This featured Beca Lyne-Perkis, who was a finalist in the Great British Bake Off. She gave some expert demonstrations on cake decoration and bread making and the audience loved the samples they were given. She also raffled the cake she had decorated for the charity and spoke about her experience of the “Bake Off”.

Friday there was a lovely lunchtime concert featuring Eleri Darkins, a Welsh harpist. Her variety of work was greatly appreciated by a large audience.

The final weekend of the Festival started with the sell out Vintage Tea Party in the afternoon and was followed in the evening with a delightfully funny film of an Australian version of Gilbert and Sullivan’s Pirates of Penzance. On Sunday afternoon there was the Hog Roast at the Golf Club. Besides the excellent food, there was music provided by the Porthcawl Ukulele bandits. Unfortunately it rained so the food had to be served indoors. The final event of the Festival on Sunday evening was a choir concert in Christ Church by Amici. Their performance was excellent and thoroughly appreciated by the audience. Towards the end the Queen and Attendants asked to say a few words and thanked Maggie Roberts for looking after them and the organisers of the Festival.

During the interval the Festival Raffle was drawn and David Silver presented the charity with a cheque for £10,000 which was an interim payment to cover the funds received so far.

Two weeks after the Festival the audio visual evening arranged by Imaging 2000 was held and the Festival Queen and Attendants were each present with a framed portrait.

At the Festival wrap up meeting a final cheque for £12,000 was presented to the charity