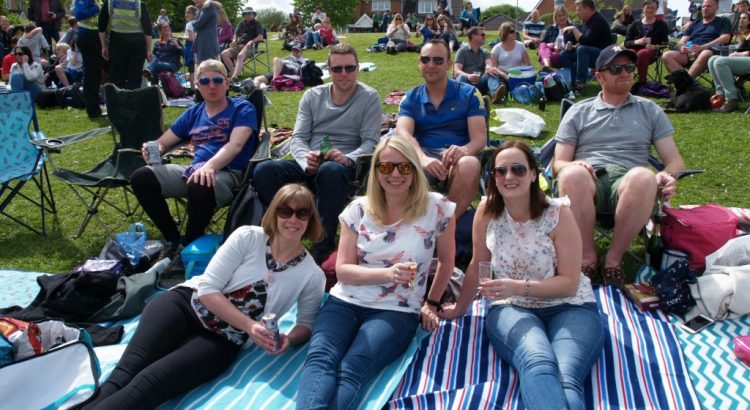 What a great start to this year’s Festival with the Parade and Fete held in glorious sunshine. After the parade from the Methodist Church to the Old Church Rooms, the Fete was opened by broadcaster Beti George. The children were entertained by a Punch and Judy show, and the adults were fed and watered with Burgers and hot dogs from the BBQ, a bar run by the Twinning Fellowship, and tea, coffee and cake provided by the local Alzheimers volunteers.

This was followed in the evening by a choir concert, organised by Cardiff West rotary at the Golf Club featuring Cantorion Creigiau Singers.

There were three events on Sunday: A triangular tournament between Radyr Golf, Tennis and cricket clubs which ended with a BBQ at the cricket ground. A Festival walk, led by Allan Cook around the City of Llandaff. In the evening there was a Festival Civic Service at Christ Church, the last to be led by Jenny Wigley before she retires, which was followed by a reception organised by R&MCC.

Monday morning saw the erection of the Maypole in Windsor Gardens in glorious weather and whilst this was going on the Fun Run went by. In the afternoon the Festival Queen was crowned by the Chair of the Community Council, Dr Ralph Vaughan. The Queen and her party were then supplied with copious amount of cake, squash and tea by the ladies of Radyr WI before moving on to the Children’s Tea Party in MVH.

Wednesday evening saw one of our new events, the “Summer Kitchen” with International Chef Angela Gray giving a talk whilst demonstrating her skills and providing samples of her delights for the audience. The event was sold out and was thoroughly enjoyed by all.

Thursday evening was the Tenovus Festival Quiz in the New School Rooms. As usual it was hotly contested with 10 teams of 8 competing. This year, for the second in a row, our team from the RMA snatched the trophy in the last round and hold it for another year.

Friday saw the first of the lunchtime concerts from the Wales Academy of Voice. Monique Simon and Henry Ngan sang and were accompanied by Llyr Simon on the piano.

In the evening, we were entertained by Cube who produced there excellent mix of jazz, organised by the Twinning Fellowship.

Saturday, in glorious weather again we were entertained by the local school orchestras and choirs, the big band from Radyr Comp, and a variety of local bands including the Radyrcals, The Filharmonics, The Fairly Awesome Five and the programme was headlined by The Dunlops. The BBQ sold out, the real ale and lager sold out and a great time was had by all.

Sunday saw the Open Garden event, which this year also included a plant sale at the OCR. This event made over £1000 for our charity.

In the afternoon there was the Dog Show and Vintage Tractor Rally in Lychgate Gardens.

Monday after school saw a very closely contested tournament between Radyr Primary and Bryn Deri schools. 3 teams from each school played in brilliant sunshine. The score for each team ended at 12-13. Bryn Deri scoring 13  each time with Radyr primary closely on their heels. Radyr Primary adult team retained the cup they won last year.

Wednesday evening saw a wonderful performance of “The Lady Vanishes” performed by a large cast of Fluellen. The packed audience really enjoyed the comedy drama and the evening was a great success.

On Thursday we had the Audio Visual evening, organised by Imaging 2000. There was a tribute to David Cargill, who had been Chair of the Festival Committee for 30 years prior to this year. A series of videos were shown as a tribute to Gilbert and Sullivan and showed old productions by the Parish Music Group. There were also presentations of framed photos to the Festival Queen and her Attendants.

On Friday lunchtime we were treated to a return visit from guitarist Rishiart Arwel in the Methodist Church who produced a spectacular performance .

The final weekend of the Festival started with fine weather which we had had throughout the Festival. The Gymkhana numbers were down considerably due to a clash with the Royal Wedding at lunchtime. In the evening there was a hog roast and barn dance, organised by our Twinning group. The French visitors all joined in and Goronwy Jones, the caller, managed to get most people onto the dance floor. The dances started fairly simply but then got a bit more complex. Explaining what to do in a mixture of English, French and Welsh did make it a little bit tricky but everyone had great fun.

The final day of the Festival started with a Hog Roast at the Golf Club followed by a performance by the Porthcawl Ukulele Band. They even managed a few local tunes for our French visitors.

The final event of the Festival was a concert for Alzheimer’s Society Cymru. We were treated to performances by Bree Evans, Owain Llyr, Hannah McCormack and Jacky Webbe and the One Voice Choir which had the enthusiastic audience clapping along.

During the event, the Festival Draw was made and the Chair of the Festival committee, David Silver, presented a cheque for £18,500 to the charity, the sum of all contributions raised by the community and the local group so far. A tribute was paid to David Cargill, who was Festival Committee Chair for the first 30 years of the Festival, and he was presented with both the Ken Innes trophy and an engraved tankard to recognise his contribution to the community.

Overall the Festival was a great success with a mixture of old and new events.